During March 2015, LOkesh Ghai was commissioned by the National Institute of Design in Ahmedabad to undertake an open elective project at the school.  Star Peacock Aeroplane and Kites invited selected students to experience the craft of ‘Katab’ both as a traditional skill and a design concept.

For the elective LOkesh paired each student with a traditional ‘Katab’ artisan, (most had worked on the Katab: Not Only Money project) who taught the student how to make sketches by hand-stitching units of cloth. The workshop was an opportunity to enhance the students understanding of expressing everyday objects as simplified, abstract motifs whilst appreciating how the traditional motifs of stars, peacocks, aeroplanes and kites used in the traditional craft of katab have evolved over time.  During the elective, students learnt the traditional skills of folding, cutting and stitching the cloth and were also challenged to source sustainable materials and carefully consider their application of colour to create a portfolio of textile explorations leading to their eventual focussed theme.

The final day of the project was time to for the women to complete all of the samplers they had been working on and to label each one ready for accession into the dictionary of traditional designs. It was also time to reflect on the project and find out what they felt they had gained from the project and what their views were on any forthcoming workshops. 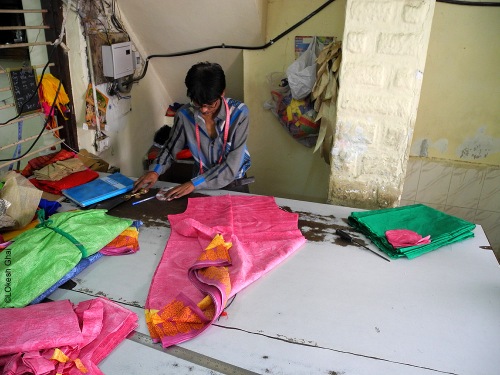 To complete the overall story of how the group created their quilts, LOkesh encouraged Premjibhai to show Emma the small local garment factories where they bought their waste fabric which had been used, as well as recycled garments, to make their quilts. Small spaces with just a few workers making garments for the local market,the spaces were a hive of activity and energetic making. Being so close to Diwali the current production was mainly of Diwali dresses that would typically be sold in the local market and the off cuts from which would likely make beautiful brightly coloured quilts and other applique designs.

Before finally closing the workshop, Premjibhai was requested to demonstrate the technique of cut work which involved accurately marking the fabric with diagonal cuts in various patterns as a reference for appliqué. To ensure all of the designs would be accurate, the pattern was drawn onto tracing paper in which small pin pricks were made.  The paper was then placed onto the fabric and a solution of tailors chalk and water was dabbed over the paper transferring the pattern onto the fabric. From this transfer Premjibhai would measure the correct cutting tool to produce the cut needed and then layering several pieces of fabric underneath cut ten pieces of fabric at a time.

On the third day of the project the group continued making samplers for the dictionary of designs while conversation around the sewing circle was in full swing with the group acting as a team to ensure all of the traditional designs and motifs used within their craft would be represented by the samplers made.

It was interesting to listen to the groups stories and how they had all come to learn their craft. Most had been passed the skills from their mothers, who had taught them their craft at an early age apart from Shantiben who had only recently picked up the skills from a neighbour fifteen years earlier.

One particularly intriguing story was from the group’s newest member Miraben, who on reminiscing about how she had learnt the craft from her mother at a very young age explained how she had also helped her mother to make a specially commissioned and very detailed white on white sari for the famous Bollywood actress, Nargis Dutt (pictured above) who she also got to meet once the commissioned was completed.

It was also interesting to learn how the Jamnaben and her husband Premjibhai acted as agents, helping to bring in large bulk orders from clients such as Fab-India and equally distributed the work throughout the village helping the community to find sustainable work.